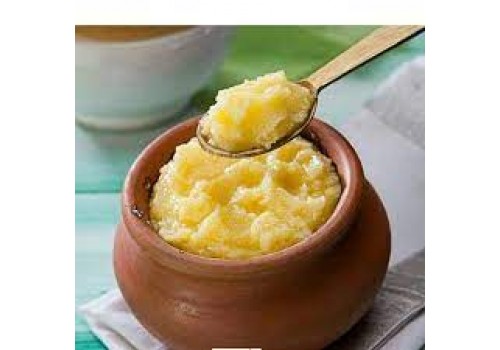 Out Of Stock More details

As already mentioned, A2 Desi Cow Ghee is the purest form of ghee made entirely from the milk extracted from desi cows. It is prepared by following the traditional bilona or churning method. Firstly, the milk is curdled and then hand-churned or motor-churned. Then, the butter collected in the process is heated until the cow ghee of desi A2 is procured.

Traces of Cow Desi Ghee were found in pottery from 6,500 BC and is considered as best for cooking. Cow Desi Ghee is made of cow's pure & fresh milk using the traditional standards, the cows are kept in a stress free environment.

Ghee when made using A2 milk which has only A2 Beta casein (a type of protein) is called A2 ghee. This type of protein is found in the milk of only some native Indian breed of cows

100 ml of ghee contains almost 99.8 grams of fat. Most of the fat present in ghee is saturated fat. It also contains cholesterol. Ghee is also rich in vitamin A, vitamin E and vitamin K if the source of ghee is the milk from grass-fed cows.